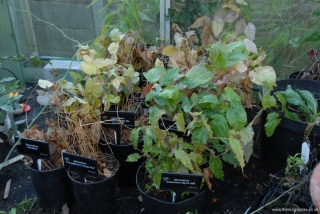 I mentioned just before Christmas, that I had found a new supplier of unusual Epimediums. They arrived a few days ago and we are pleased with the quality of the plants. The supplier is a nursery called Tuckermarsh Plants and is owned by Mark Fillan down in Devon.

I have given the new plants their ‘posh’ labels with accession numbers, source code and year of aquisition, as you can see in the picture. I am looking forward to their flowering in the spring.

Yet another Epimedium project to report on, I’m afraid. Wishing to make as good a National Collection as possible and and having acquired a considerable number of new Epimediums, we have been looking for more suitable areas to plant them out, within our limited space.

Once again, the aquatic side of our garden has taken a hit. 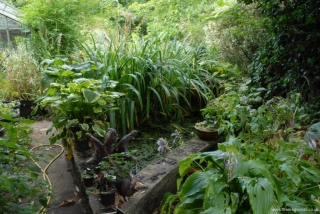 There were three concrete raised ponds arranged so that pumped water would over flow from the highest to the lowest.These were built nearly forty years ago and all were leaking, to the point that major repairs would be needed for them to function properly again, as ponds. Also over those years they have become rather shaded by surrounding Magnolias, for aquatic plants to give of their best.

Therefore back in mid September, we started the not inconsiderable task of converting the highest of the three ponds into a raised bed for Epimediums and other shade tolerant plants. 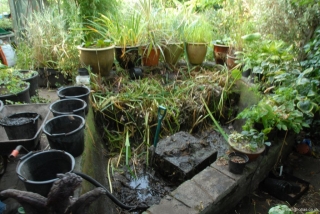 The first job was to pump out the water and to remove the aquatic plants. There were a couple of Peltandra plants which we moved to a new home, but a car full of mostly Iris pseudacorus var.bastardii went to be recycled at our local rubbish tip.

There were three brick built waterlily boxes and a brick retaining wall holding back coarse gravel in an ‘under-gravel’ filter. The soil from the lily boxes was bagged up for later use as was the gravel. The brick boxes and wall were then broken up with a sledge hammer. 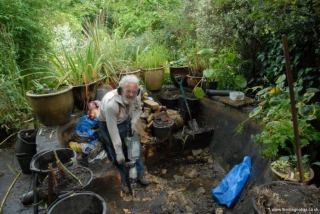 I have been hankering for a concrete breaker for years to be told by the better half, I didn’t have enough possible future use to justify buying one. In a fantastic piece of syncronicity or fate, on the day I needed to start breaking up the bottom of the pond, Screwfix sent me an E-mail where their budget concrete breaker was £20.00 off, as a deal of the day. I was permitted to buy this impressive tool, and wasn’t I glad I did? I had forgotten that I had built the pond to hopefully see me out. 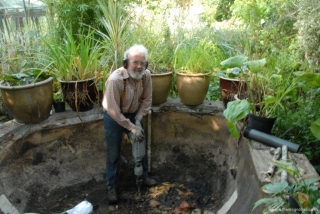 The bottom was about 6 inches thick of good concrete, reinforced with chicken wire. The chicken wire would have made it nigh on impossible for an old man with a sledgehammer to break it up. As it was, it took quite a few sessions to puncture through the majority of the concrete bottom with the breaker. The broken bricks were spread over the broken concrete, plus other hardcore from around the garden and donated by our friendly builder. 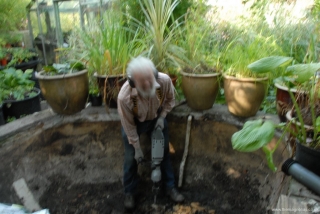 Over this went the filter gravel, some odd bags of dirty pea shingle and old aquarium gravel. We also had two sacks of old nylon pot scourers which had formed a ‘state of the art’ koi filter in the 1980s which went in the hole to help fill the void. The lily box muddy earth went over this.

Eighteen months earlier our next door neighbour got us to remove his small front lawn, as it was constantly being dug up by badgers. When we did this we found a lot of cockchaffer grubs which were obviously the cause of the badger activity. 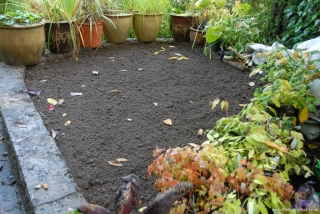 About a cubic yard of the turf and soil which had been in plastic bags for well over a year was used next in the pond. Much to our surprise, there were cockchafer grubs still alive in the long dead turf. With all the above materials in the hole, there was still about 20 inches of soil and growing medium needed, to fill the remainder of the bed. At the end of the day it took 5 ton bags of soil, 20 builders’ bags of sharp sand, 6 x 150 litre bails of peat and 6 x 75 litre bags of multipurpose compost, to complete the job. 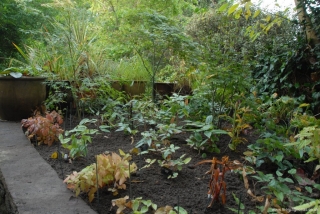 Three Japanese Maples have now been planted for structure and about thirty Epimediums plus a few Roscoeas, snowdrops and Cyclamen, to give a longer season of interest. A dozen or so of the Epimediums are new French hybrids from Thierry Dellabroye.We are waiting with a good deal of anticipation to hopefully see many of them flower for the first time for us.

When we are feeling strong again, we may start changing the other two ponds into raised woodland beds. Fortunately from the work and back filling point of view, the two together are probably smaller than the one we have completed.

Since about 1989, a 6ft x 3ft fibreglass tank has sat on the greenhouse bench and been used for a number of purposes. The most notable were for the raising of pygmy water lilies, baby koi carp and tiger salamander tadpoles. For a few years it has been sitting there taking up valuable bench space and not being used. Linda came up with an idea to recycle the water tank as an additional 18sq ft nursery bed. 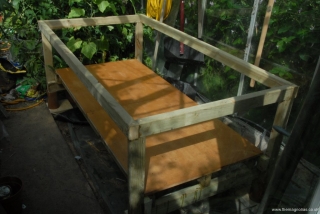 Recently having ordered more bare-root Epimedium plants from Koen Van Poucke (www.koenvanpoucke.be) in Belgium, extra protected nursery bed space was needed. The raised bed in the ‘air-raid shelter’ greenhouse, planted last autumn, has been very successful. Some of the plants have been lifted and potted, while others will be left in situ for the moment. 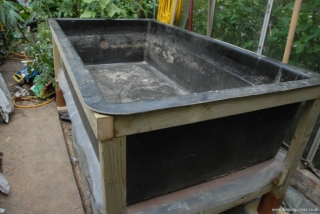 We realised that it would be more convenient and less likely to be dug over by badgers or cats, if the soil surface were raised to bench height. With the considerable weight of soil and organic matter it would contain, it was obvious that a stand of substantial construction would be required. Therefore 3″ x 2″ and 4″ x 2″ timber has been used along, with two pieces of a very dense MDF type board. The MDF was given to us quite a few years ago having been used as temporary dining room table extensions, for Christmas dinners. It has been patiently waiting in the garage for another good use! We have painted it with yacht varnish and put two layers of polythene over it to avoid it getting wet. To prevent the wooden legs getting wet at the contact with the ground they have had lengths of drainage pipe pushed over their lower ends. The pipe was softened with a hot air gun to accommodate the wood and then driven on with a rubber mallett. The legs stand on 9″ square pieces of paving slab. 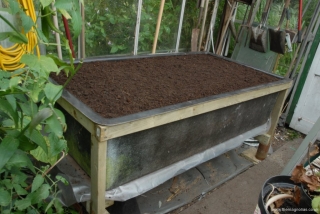 Drainage holes have been drilled along the outer edges of the base to prevent possible water-logging. We have filled the tank with a sandy loam mixed with sphagnum peat and fine composted bark. The bed will be shaded with netting shortly. The plants will hopefully arrive later this week. 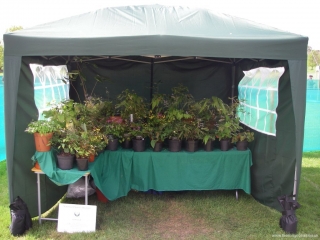 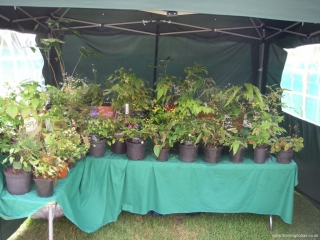 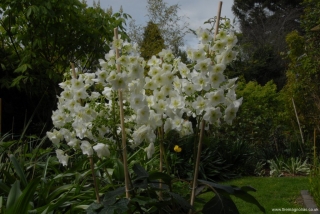 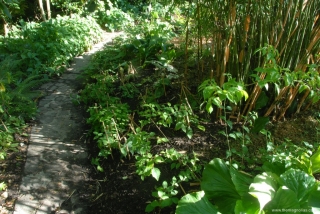 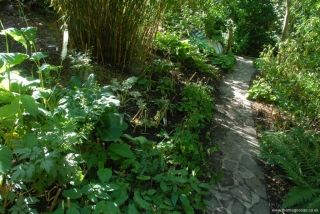 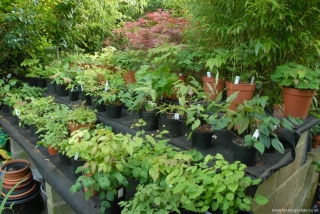 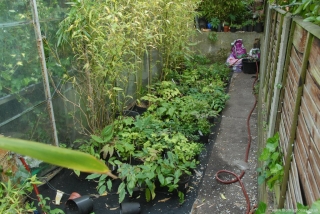 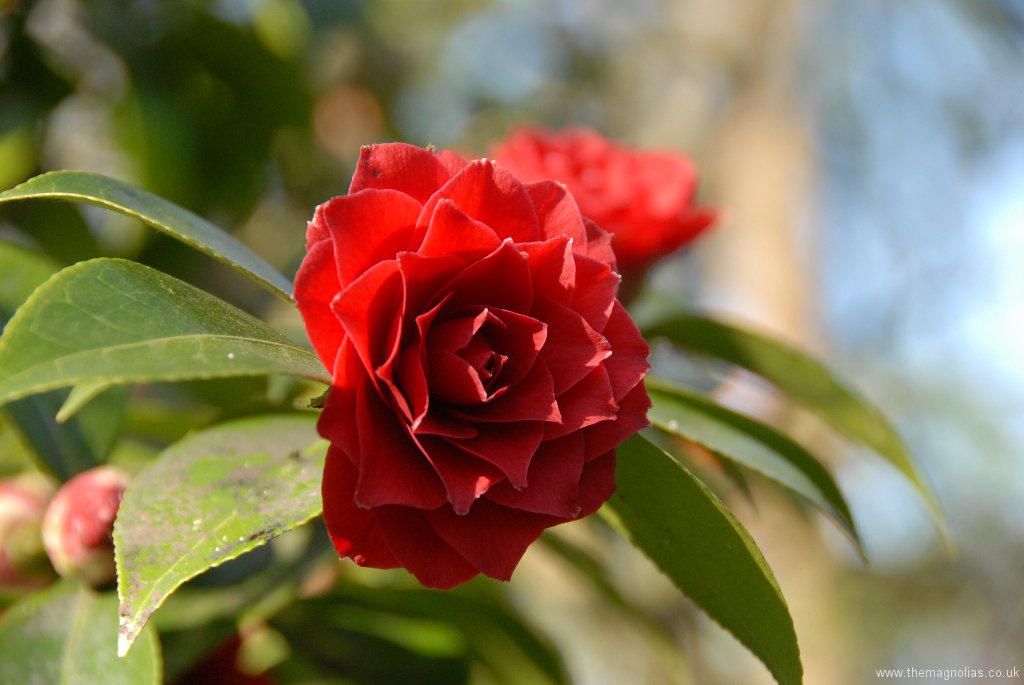 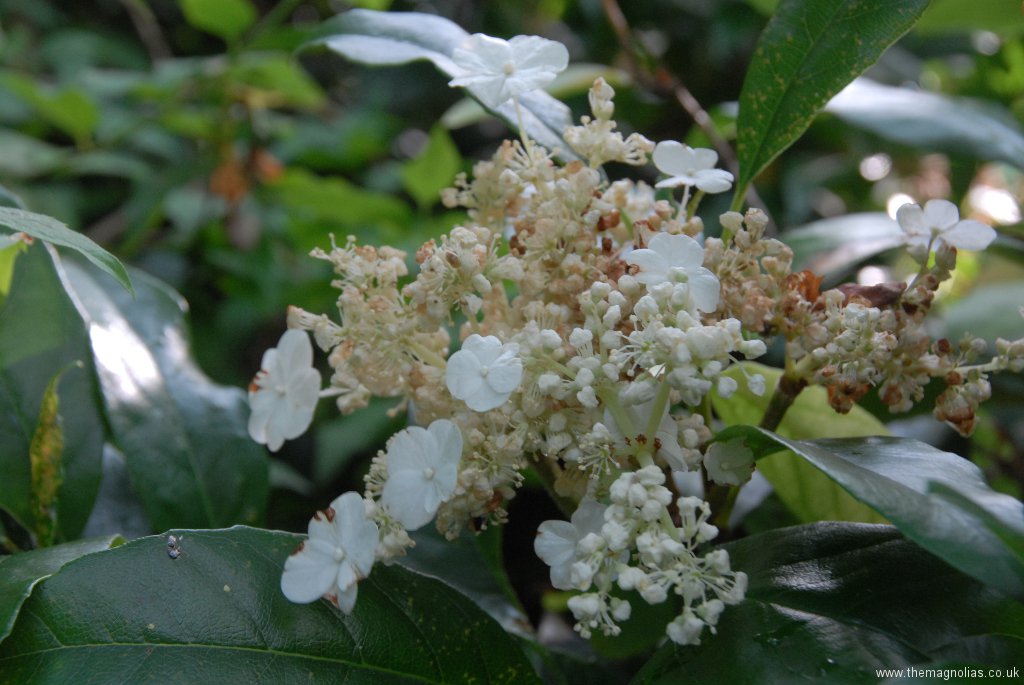 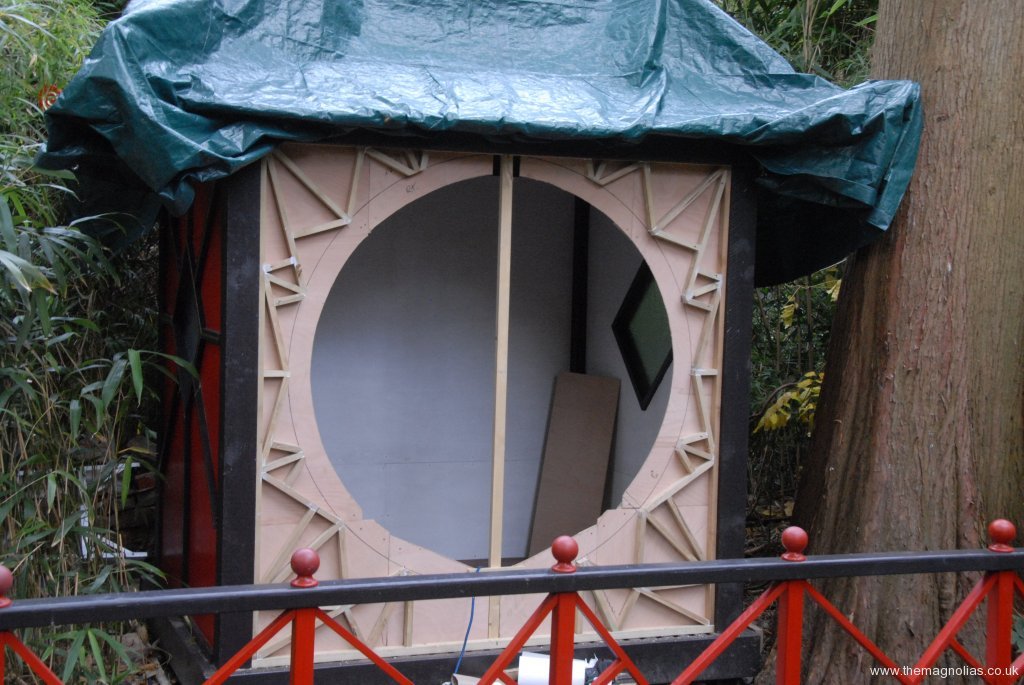 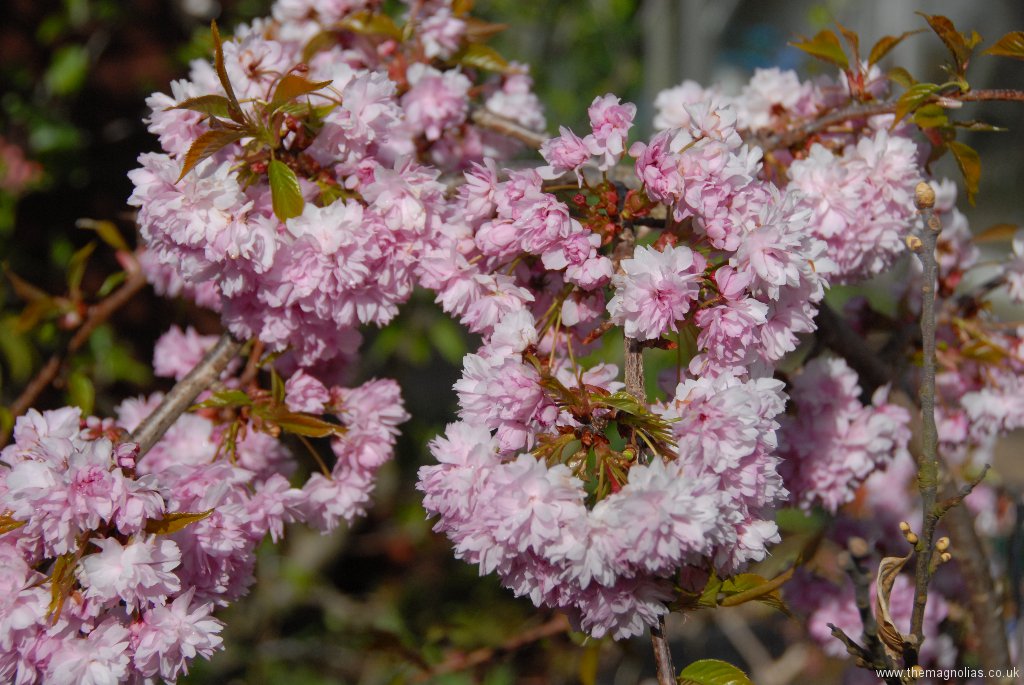 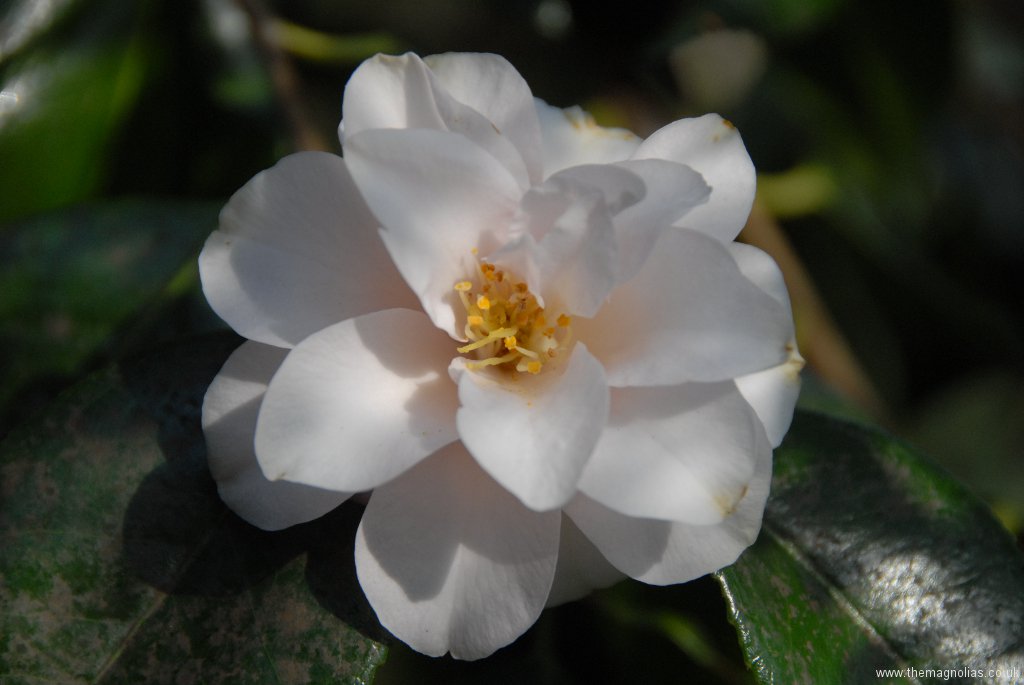 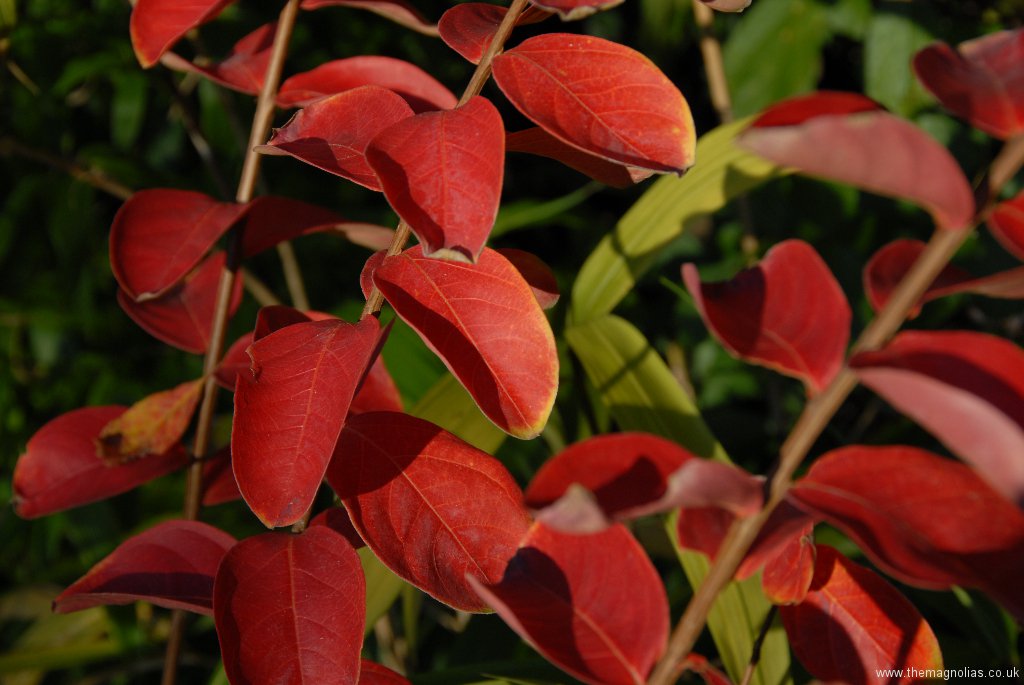 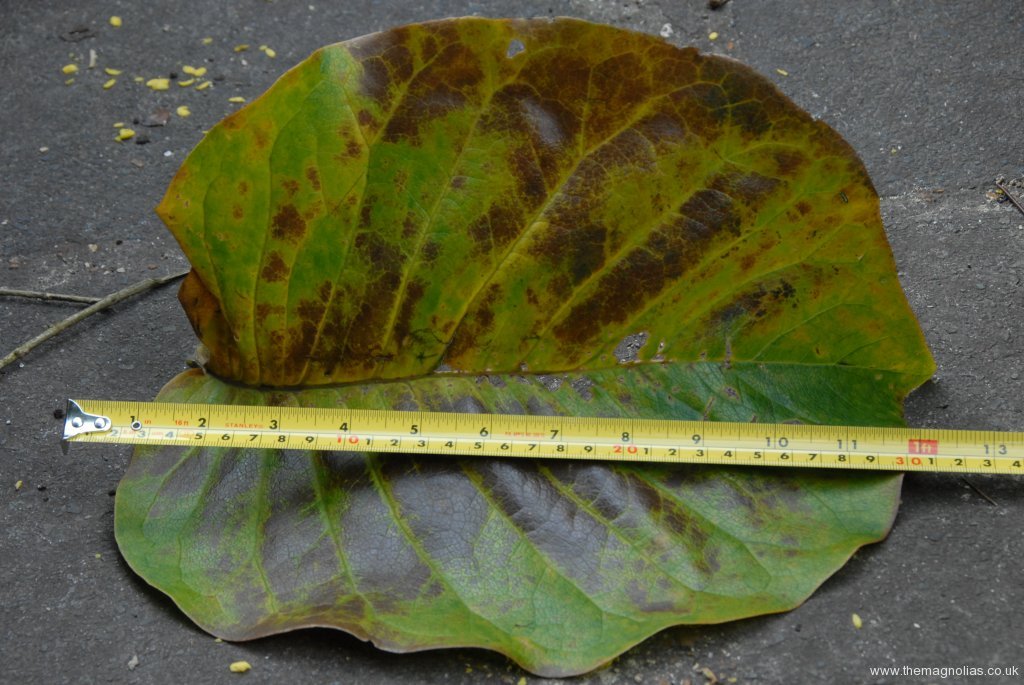 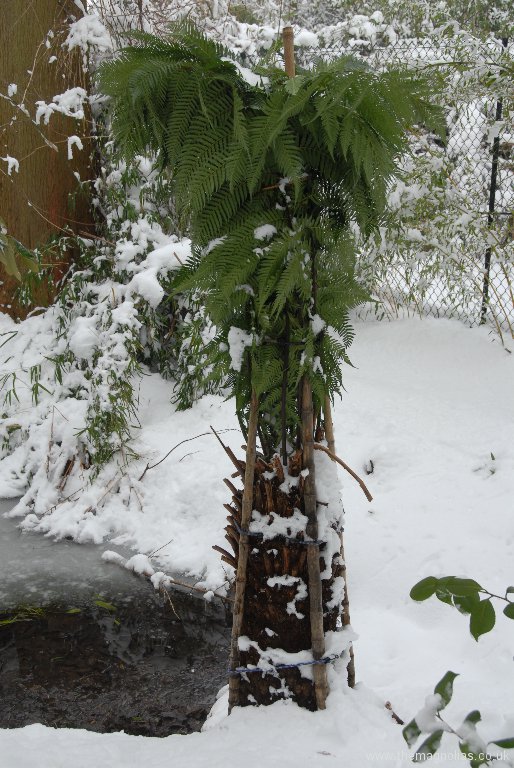 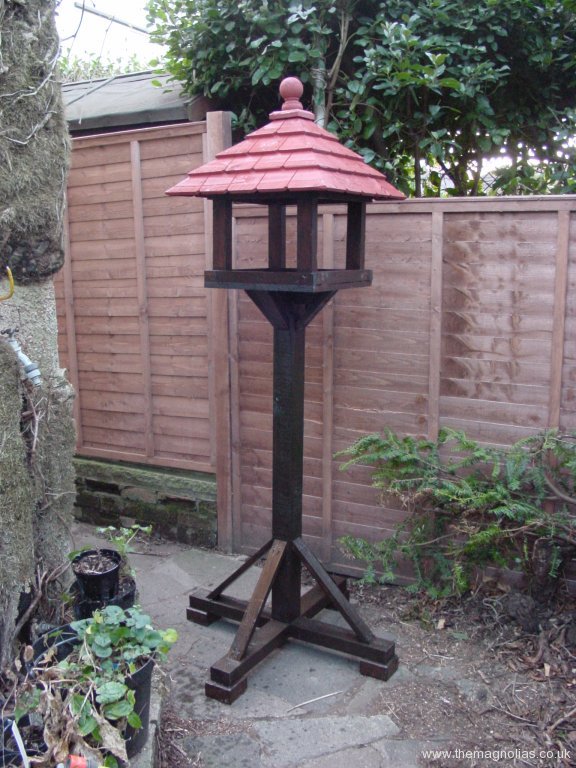 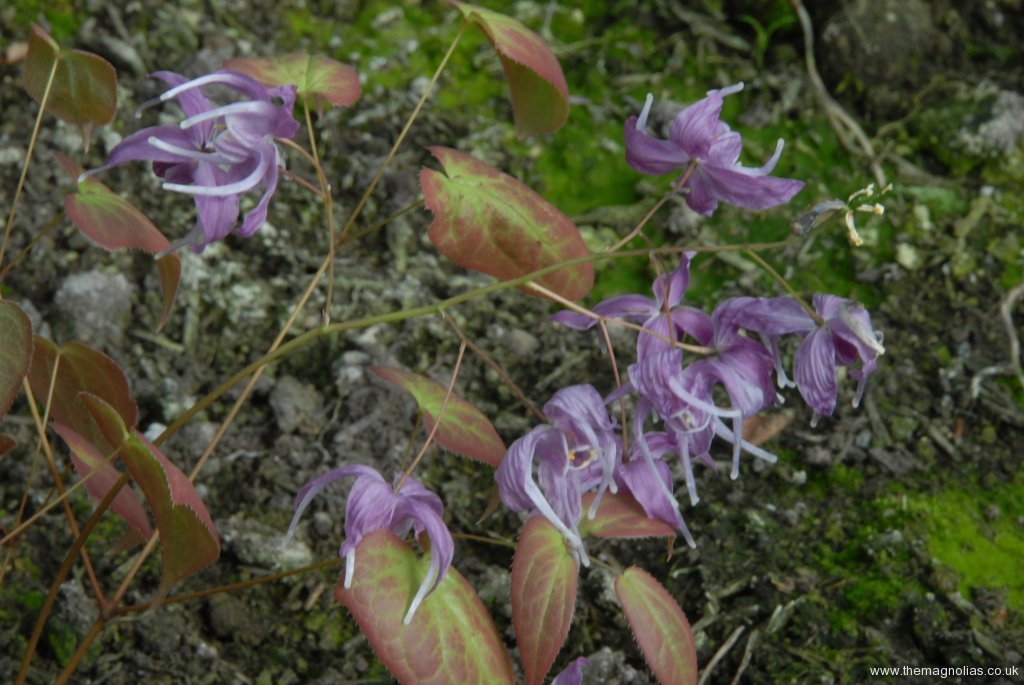