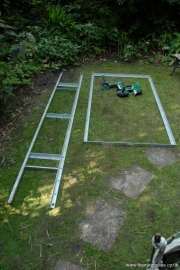 Paul and I started the new pagoda construction around the 17th May, by cutting up some heavy gauge galvanised steel fence posts left over from the previous failed badger fencing project. We used a Hitachi cordless band saw to easily and accurately cut 45° and right-angled cuts, to become the frames for the pagoda and walkway.

Our son-in-law, Daryl brought his welding equipment to ours’ and over two sessions welded and ground the steels together to make the two frames. 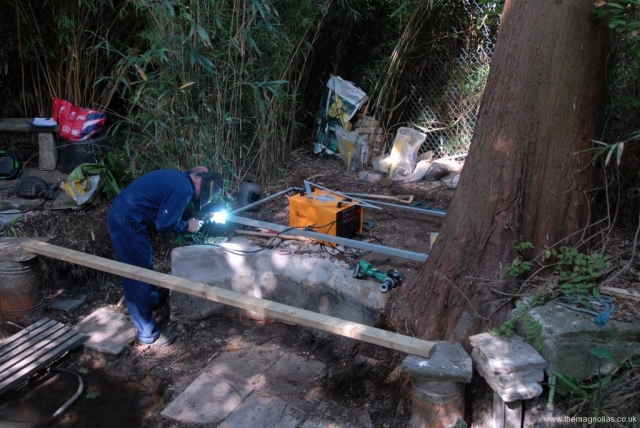 As soon as the frames were made and painted, work on the timbers to be fixed to the frames began. 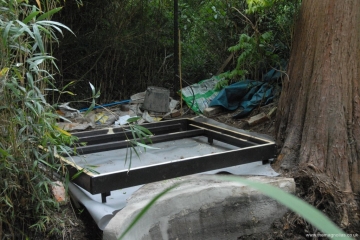 We were able to use the four original steel anchor points from the old pagoda for fixing the new pagoda frame. Due to the close proximity of our sizeable Taxodium distichum (Swamp Cypress), we could not make the pagoda square as was the old one. We innocently went with a rectangular shape not realizing this was to make life much harder when constructing the roof. 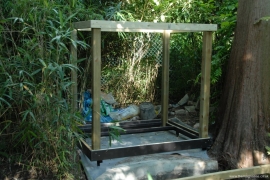 We fixed uprights to the base frame and then a similar wooden frame at the top on which to build the roof.

The next stage was to create a cantilevered step to bridge the gap between the pagoda and the planned walkway between the stepping stones. When this was in place the flooring of 2”x2” timber was laid with a gap between each for effect and drainage. 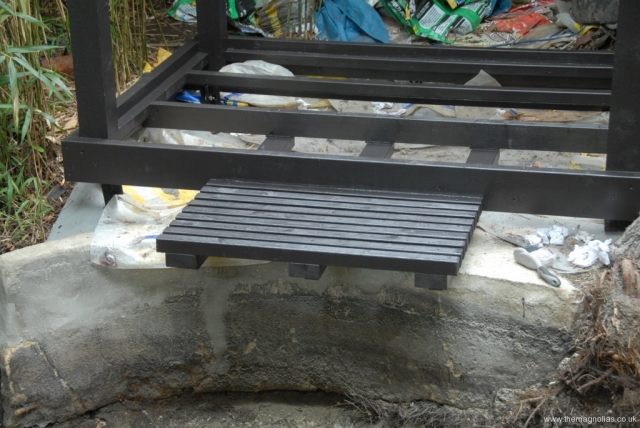 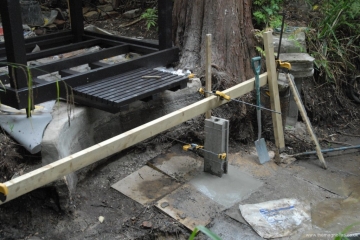 The next task was to build the walkway.

I had come up with a successful pillar construction method Paul and I had used for the new stepping stone.This was using two cut lengths of slotted concrete fence posts temporarily wired together, concreted into a large hole in the bottom of the pond and then filled with a cement and sharp sand mortar, down the centre hole. Two more pillars were created for the walkway. 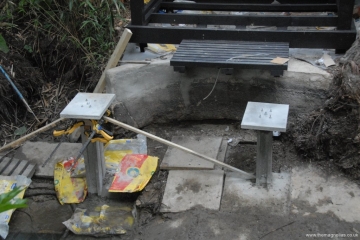 This time large galvanised coach bolt was put in the centre of the top of each pillar, sticking out a couple of inches as a fixing point. When all the concrete had gone off, I drilled four holes near the outer corners of each pillar and used a miraculous cement epoxy fixing mastic to secure lengths of 6mm stainless steel studding. I had never used this technique before and was amazed how quick it went off, and only just managed to start the second pillar before the two part mastic went off in the nozzle. 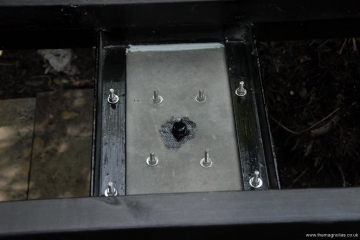 I cut pieces of thin paving slabs to go on top of the pillars and drilled five holes through them to line up with the coach screws and studding. Using nuts and washers above and below the slabs I was able to adjust the slabs up and down like a surveyors’ theodolite until they were flat and level with each other and at the correct height to receive the walkway steel frame and wooden decking later. 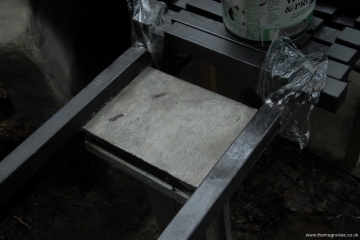 The next job was to drill further holes through the slabs and the steel frame for bolting the frame in place. When I was happy they were level, I worked a strong concrete mortar on top of the pillar and under the slab for stability. Later I cast a cement mortar layer over the coach bolt and studding to finish off the tops of the pillars neatly. 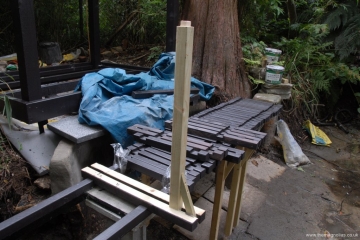 The wood work consisting of two longitudinal lengths of 2”x2” timbers and many crossways pieces of the same were made to form the deck. Paul thought we should go the extra mile, and rout out half an inch or so out of each cross member so they fitted over the longitudinal timbers, as we had done on the bridge. After some thought we decided to have a handrail on the outside only. I designed a reasonably strong and simple joint with a diagonal strut for added strength, to go between pairs of longer footway cross pieces and vertical handrail supports. 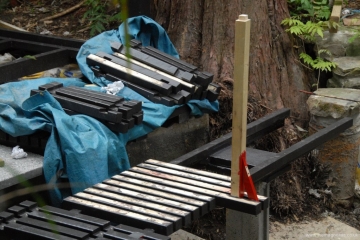 After we had a piece of 3”x2” timber for a handrail, fitted to the five vertical hand rail supports, Linda suggested that rather than cut off the excess length of wood on the right end, we should put in another upright from the bottom of the pond to create a handrail by the two stepping stones. This I did by creating a mortis hole underneath the handrail with difficulty, and inserting the lower end of the 2”x2” upright into a 4” plastic drain pipe concreted into the pond bottom and designed so the wood should be above the final water level. 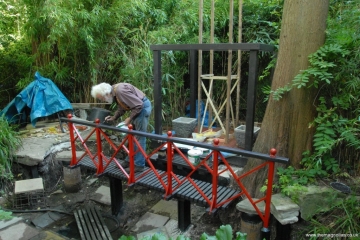 After making quite a few sketches we decided on a pleasing pattern for pieces of light batten timber to fill in between the hand rail supports. When these were added there was discussion between Linda, Paul and I about what colours everything was to be painted. Friends were also asked for their opinions. In the end we went for dark oak stain for the handrail, and the fire engine red for all the hand rail supports and fencing finial balls which we added above each vertical support.