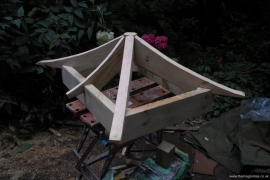 We had decided that the roof of the new pagoda would be only two tiers unlike the three of its predecessor. Paul and our neighbour, Dave independently when asked said they thought the smaller top roof should be 40% the size of the lower one, and having nothing better to work on I did a rough sketch, to these proportions. The drawing seemed about right so we progressed by making a small roof frame 40% the size of the lower frames. 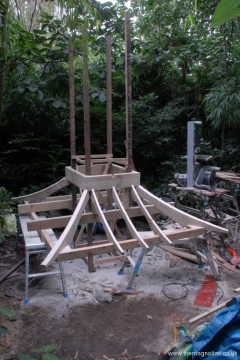 We then built a make shift temporary wooden scaffold which was to support the small frame above the larger lower one at an appropriate height, whilst we made and fixed joists.

In a brighter moment, it occurred to me that rather than be constantly going up and down steps while creating the joists in situ, it would be better to do it at ground level. We therefore made a temporary copy of the larger roof frame to use at a more convenient level and also in the area where the timber was stored and cut away from the pagoda pond. It was now we first discovered the extra headaches caused by the rooves being rectangular rather than square. 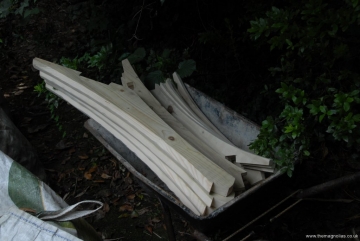 We clamped the small roof frame on the temporary scaffold at different heights and played with recycled ply templates to work out agreeable curves and falls to hopefully make a successful oriental looking roof. 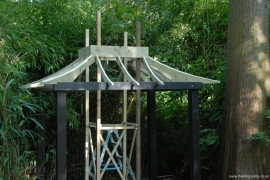 When we were happy with diagonal, lengthwise and crossways templates they were copied onto 2” thick and 1” timbers to make the joists for the two roofs. An eight sided central pillar was made to take the top roof joists at the centre of the roof. This was drilled through vertically for the fixing of a top finial. This I had made from a large and a smaller fencing ball finials plus a piece of wood I turned myself on a forty year old Black and Dekker wood lathe attachment and drill!

Having made all the joists, the first fitted permanently were the large diagonal ones for the main roof. We left fitting the thinner right angled ones for later until the small roof was completed or access to make the small roof would have been much harder. 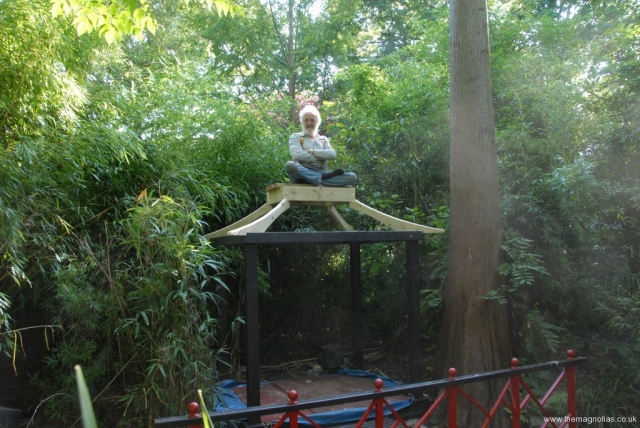 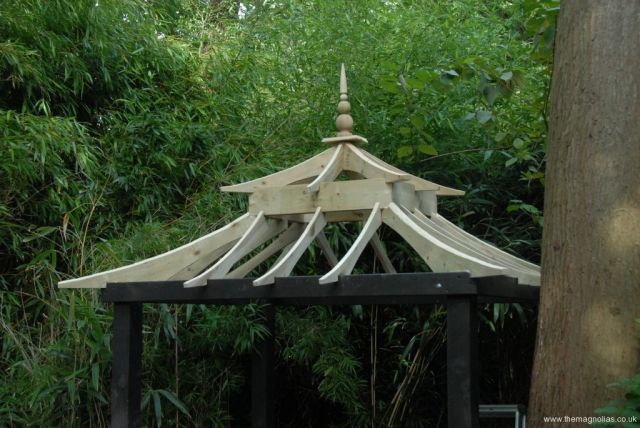 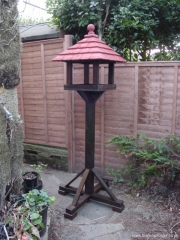 The top roof joists were fitted next along with their central pillar. I came up with the cladding method when I made a bird table for my sister for Christmas 2004. I suspected I could make a passable tile or wooden shingle effect by cutting slots in feather edge fencing boards and accentuating the effect by sawing notches coinciding with the slots in the thick edge of the boards. We knew that yet again considerable work would be involved but we decided that it should look good at normal viewing distances so started what I have estimated to be at least a thousand cuts at three inch spacing and notches. 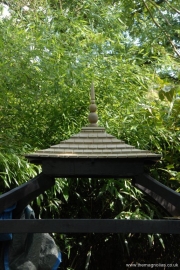 A considerable wastage was unavoidable but errors compounded this. We decided to paint what would be the inside of the roof with Protek white wash Woodstain and Protector before fixing to save the problems of painting above your head and getting white on the dark oak joists etc. This painting proved a bit of a problem because of deteriorating autumn weather with cooler temperatures and frequent showers. The fencing cladding was fitted reasonably well to the top roof despite each overlapping layer having to be cut at different angles due to the rectangular roof and the curve of the slope. 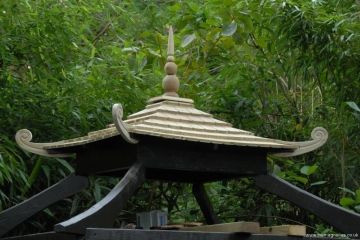 We had discussed finials for the corners of both roofs, Paul even suggesting dragons. However for relative ease of making, I quickly drew a simple scroll finial, which did look somewhat plain until Paul suggested he routed a groove in the centre to accentuate the scroll effect. Paul, having made a thin plywood pattern cut four more out of 1” thick plank with the band saw. Then following another plywood pattern made on the saw he stencilled a line to follow by hand with a small router.The next thing he insisted was essential were ridge tiles to cover the relatively neat joins on the diagonals. I admit that I had previously thought about it, and how it could be done perhaps using thick bamboo. However these would vary in thickness and bamboo in our experience is prone to splitting over time. In the end I remembered seeing some tree stakes in Wickes which had been somehow turned or stripped through a machine to be the same diameter throughout their length. 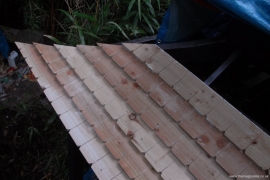 We cut tree stakes longitudinally with an inexpensive table (flip over)saw, which I bought maybe twenty years ago, and had never used because of the sheer weight of it to move it to site. It did a great job despite being a bit frightening! We used a cheap second hand, router table with router, which with some practice we were able to produce C shaped ridge tiles. We also had to paint the top roof before doing more to the main roof due to access. 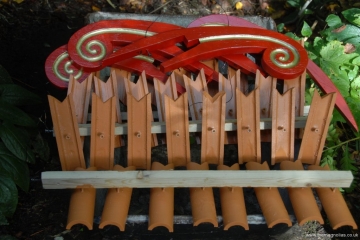 We looked on the internet at oriental, Chinese and Japanese pagodas to see what the colour of roofs should be. It appears that almost any colour including red and green were out there. I wanted it to be gold even metallic gold. In the end we bought Protek gold Wood Stain and Protector to try. It turned out to look good especially with the sun shining on it. I still hankered for over painting it with metallic gold but was overruled by the majority, Paul, Linda and others.

Having made and painted the small roof, the slog of the lower roof was completed and fitted with scaled up finials. The construction and painting of this was made more difficult as it had to be done from steps stood outside the pagoda, but we prevailed eventually. 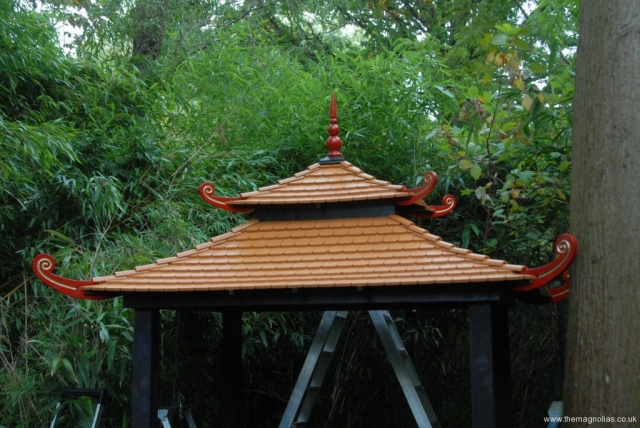 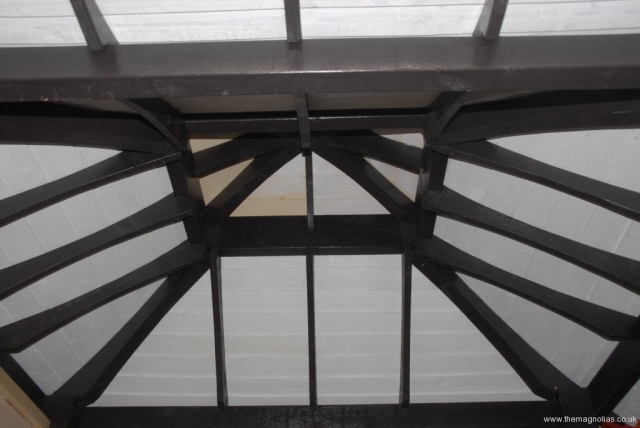