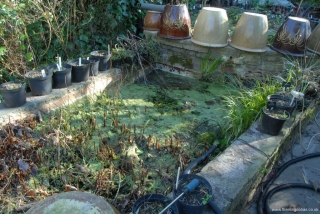 Pressure for more Epimedium planting space and the fact that this pond also leaked, persuaded us to undertake another project requiring considerable human effort.

The job was very similar to the earlier pond conversion, but mercifully rather smaller than last autumn’s task. 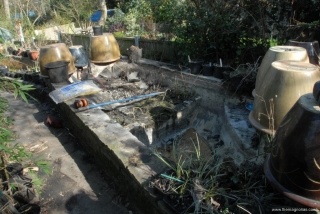 It had been a rather shallower pond and therefore needed a lot less soil etc. to fill the void.

I will leave it to the pictures for you to get an idea of the transformation and the work involved. 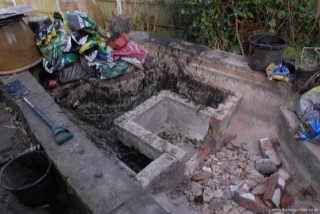 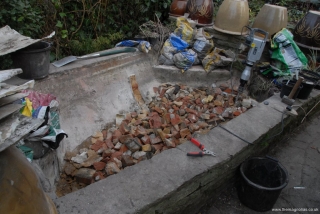 Coincidentally our neighbours were having their bathroom modernised and allowed us to recycle the obsolete facilities. Their old tiles, wash basin pedestal, and even their toilet and cistern were broken up for drainage and filling the space. 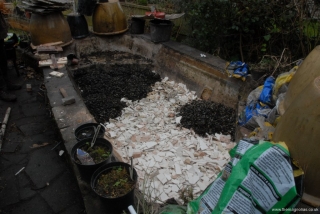 This new bed has been planted with three Japanese maples, Epimediums and Roscoeas. This time the Epimediums are all Japanese, being E. grandiflirum, x youngianum and other non specific Japanese Hybrids. With a couple of exceptions they are all completely deciduous.

This is a bit of an experiment trying them out in a fairly sunny site. 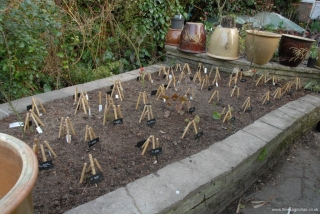 After planting apparently empty looking pots they have grown well so far and many have flowered. The Roscoeas have been planted for late summer and autumn flowers. They seem more than able to push through a canopy of Epimedium foliage, to give a display of their orchid-like flowers, in purple, lavender and red shades plus yellow and white.. They come into growth very late so it is a very good idea to indicate where they are planted with short pices of bamboo cane etc,. to stop you trying to plant something else in the space.