Since we bought our new garden five and a half years ago there have been constant attempts by either a fox or badger to burrow into a neighbours garden in a bank along the boundary. 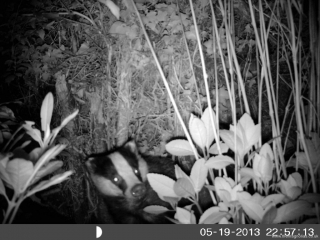 After many attemts to fill in the holes we gave in and for a year or more there are just two holes and no further soil has been excavated after the first few barrow loads.

Last week Maplins sent an E-mail offering an ‘Outback Cam’ which takes images in the dark using infra-red when it senses movement. We bought one for a bit of fun, and set it up in front of the holes. We now know who was responsible!